OCR A Level Geography
Topic 2.1 – Changing Spaces; Making Places
1. What’s in a place?
2. How do we understand place?
3. How does economic change influence patterns of social inequality in places?
4. Who are the key players that influence economic change in places?
5. How are places created through place making processes? (Case study of one place that has undergone rebranding.)

2. Subject overview
This study considers the urban regeneration process and its impact, for example, on the residents of urban neighbourhoods. It is an opportunity to understand the necessity of considering the opinions and the role of all stakeholders (including residents) in plans involving urban change.

Over the past two decades, the historic city centre of Palma (Mallorca, Spain) has undergone a process of urban change. Poor quality housing, high unemployment and social exclusion defined the most deprived neighbourhoods. Public funds, followed by private investment, have been used to reverse the decline and rejuvenate these areas by improving the quality of buildings and public spaces and supporting local businesses.

More recently, buildings in the city centre have been purchased by foreign investors with the objective of converting them into luxury hotels, tourist apartments, second homes or nightlife venues. This new aspect of the regeneration process is currently provoking conflicts between local residents, the city council and tourists.

In summer 2016, the following graffiti was painted on walls in the historic centre: “turismo es terrorismo” (tourism is terrorism).

In March 2015, The Sunday Times selected Palma as the best place in the world in which to live as it “has everything” and everything is “easily accessible”. It is also just 10 minutes from the airport and there are plenty of cheap, regular flights to almost all European countries.

Palma is divided into five districts: Norte, Centro, Poniente, Levante and Playa de Palma (North, Centre, West, East and Palma Beach). Each district is subdivided into neighbourhoods of which there are a total of 89.

According the Fundación Impulsa (Impulse Foundation), the biggest industry in Palma is real estate.

Urban change: regeneration and tourism
As societies change, so must towns and cities. For example, a nineteenth century city complete with hundreds of factories for manufacturing goods is not appropriate for twenty-first century urban life. Cities must adapt and change.

Regeneration is often associated with gentrification, a word with both positive and negative connotations, depending on your point of view. Gentrification is defined as “the process of renewal and rebuilding accompanying the influx of middle-class or affluent people into deteriorating areas that often displaces poorer residents.”

A classic gentrification process occurs in the historic centre of a city. First, local residents (often working class or marginalized groups) demand that the city council improve both the appearance of their neighbourhood and the quality of life. Public and private (both local and foreign) investments take place. As a result, beautification occurs. This is associated with a new neighbourhood identity. Land/property values and rental prices subsequently increase and the middle classes start to move in. They are attracted by the fact that living in a changing neighbourhood is seen as desirable. A negative consequence is that many of the original local residents are forced to move out of their neighbourhood as they cannot afford the increased rental prices.

In Palma, the regeneration process is directly linked to the boom in tourism that the city has experienced. The gentrification process has partially diverted from the classic definition as a result of the huge amount of foreign investment and the use of properties by tourists. Rather than buildings being used as residential accommodation, many have been converted into luxury hotels, tourist apartments, second homes or nightlife venues. This has resulted in the loss of the sense of community which first made the neighbourhoods desirable places in which to live or spend time.

In terms of tourist apartment rentals, the website www.insideairbnb.com reported (Dec. 2017) that there were 2972 offers of www.airbnb.com accommodation within the city. In 2016, there were 245 different hotels and hostels in Palma, with a total of 44,574 beds. The occupancy rate for the year was 76.7%.

In 2016, in terms of cruise ship passengers, Palma was the ninth busiest port in the world (the third busiest in Europe). The port was visited by 516 cruise ships carrying 1,626,620 passengers. A report in 2011 estimated that cruise ship passengers spent 180.33 million euros (or 112.09€ per person) in the Balearic Islands of which 55.3% was in shops. The rest (44.7%) was spent on travel agencies, bars and restaurants, transport and accommodation.

4. Fieldwork
The study involves a comparison of three adjacent neighbourhoods in Palma, Mallorca: Puig de Sant Pere, Sa Llotja and Sa Gerreria. Each has undergone a process of change over the past 20 years.

Qualitative and quantitative secondary data is also available on request. This includes: transcripts of interviews with members of different stakeholder groups; historical photographs, maps and newspaper reports; data and graphs regarding demographics, employment and transport.

Field study sites:
Es Puig de Sant Pere
This neighbourhood dates from the eleventh century when it formed part of the Arabic city of Medina Mayurca. Following the Christian reconquest in 1229 the city was renamed and the St. Peter’s Oratorio (a church) was built. The area established itself as a seafaring quarter for sailors, fishermen and boatbuilders. New walls and the huge defensive St. Pere’s bastion were built in the late sixteenth century. The bastion housed one of the most prestigious artillery schools in Europe. The bastion also housed a vast subterranean water storage chamber (L’Aljub) which provided fresh water for the entire neighbourhood.
The twentieth century was a period decline for the area as many of the craftsmen who lived and worked there, moved away.

The military’s use of the St. Peter’s bastion ended in 1952 and in 1961 the land and buildings were acquired at auction by speculators. In 1963, the use of bombs to deliberately demolish a large part of the historic wall led to an outcry. Lobbying groups were established to provide opposition to proposed developments and to declare the area of historic interest. The wall was subsequently rebuilt using funds from the Spanish government.

In the 1970s, neighbourhood associations also protested against property speculation, fuelled by the tourist boom, and started to fight for the regeneration of the area after a building collapse in 1975 killed two people.

In 1997, a plan was announced to construct a flagship development – a contemporary art museum in the St. Peter’s Bastion. The Es Baluard museum opened in 2004 and has successfully attracted many visitors to the area. 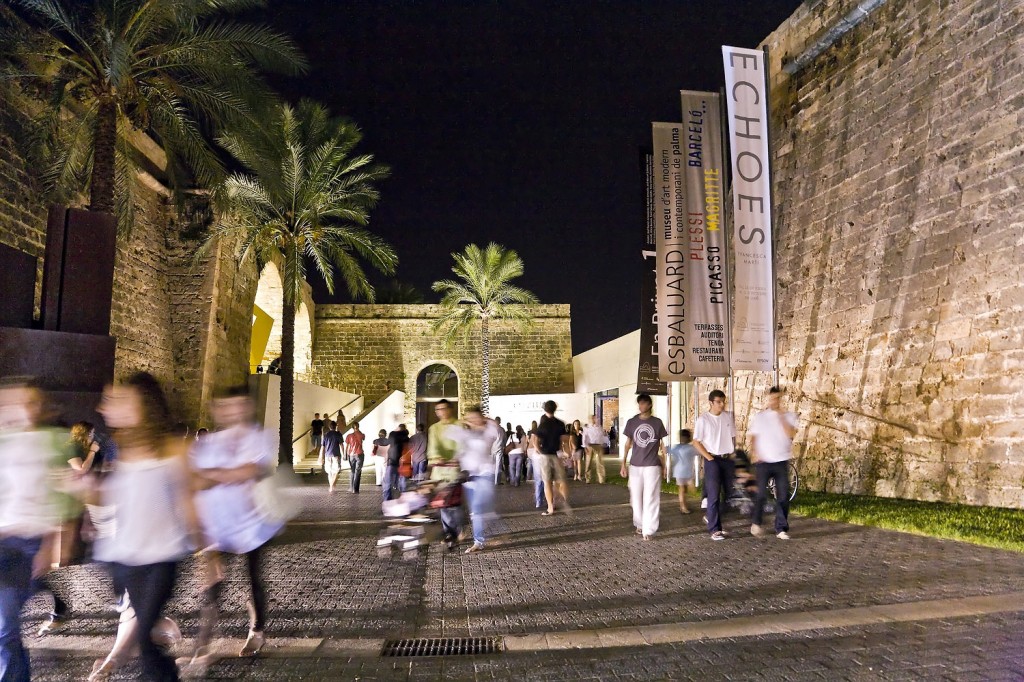 The Can Chacón building in the area now houses the offices of Mallorca’s government department of Cooperation and Social Services.

Sa Llotja
Opposite the yacht mooring in Palma’s port and to the east of Es Puig de Sant Pere, is the neighbourhood of Sa Llotja. It dates back to the eleventh century but is named after the Merchants’ College guild building built between 1420 and 1452. This architecturally impressive Gothic building is now one of the city’s top tourist attractions.

In the fifteenth century, due its geographical location, Mallorcans, Castillians and Genoese established the island as a hub of international trade and Sa Llotja was where business was conducted. The wealthiest traders became the city’s aristocracy and built impressive Gothic houses in the area which can still be seen today. The Merchants’ College lasted from 1403 until the nineteenth century. This was despite the decline in Mediterranean trade in the sixteenth and seventeenth centuries as a result of piracy and the strategic relocation of trade to the Atlantic Ocean. In the nineteenth century, the guild building was utilised, successively, as a grain store, a barracks and a cannon factory. 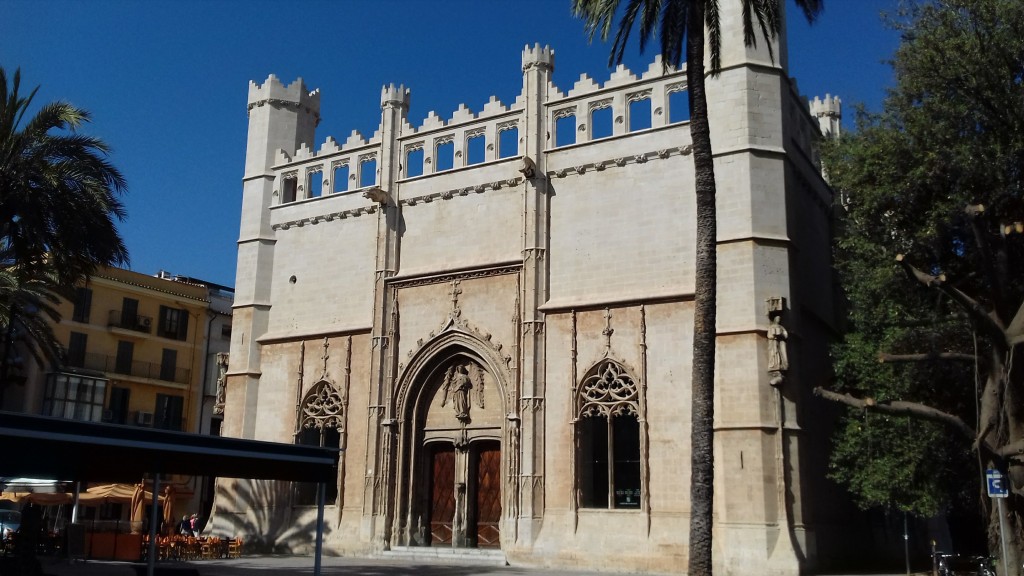 The degeneration of this seafaring neighbourhood lasted until the latter part of the twentieth century. At the beginning of the 1990s bars began to open. Within fifteen years the neighbourhood had established itself as the heart of Palma’s nightlife with a wide range of bars, restaurants and hotels. Over the past decade, there has been an accelerated gentrification process with the middle classes renting and purchasing properties there. Today, international investment in properties and businesses is very evident in Sa Llotja and rental prices have sky rocketed. However, in parallel, the local neighbourhood association has been campaigning (since 2008) against noise pollution.

Sa Gerreria is an area of the Sindicat neighbourhood centred around Gerreria Street in the north-eastern part of the historical quarter of Palma. The name means ‘the potteries’. From the Middle Ages it was an area populated by tradespeople and those involved with crafts. During the tourist boom in the 1960s these people began to move to other parts of the island where they could sell their products more easily to tourists. The buildings were not easily adaptable for use by other businesses and, due to the low rents, they were occupied by the unemployed, low income immigrants and other marginalized groups. The area had been known for prostitution for decades and was referred to as Barrio Chino (Chinatown). However, in the late 1970s and 1980s, Sa Gerreria also became synonymous with drug dealing and drug use. 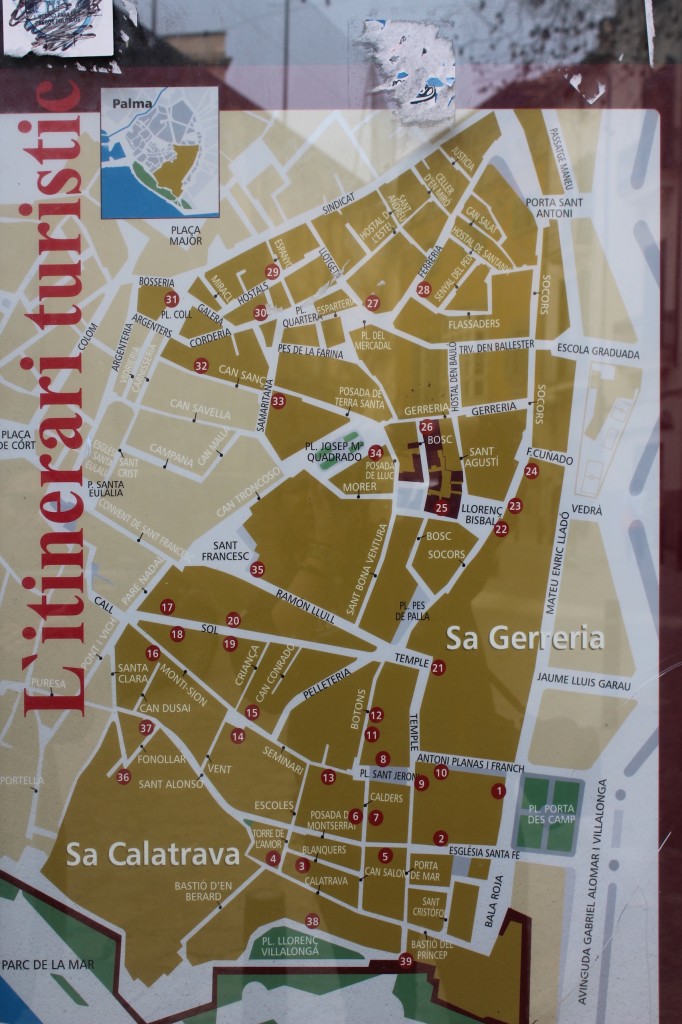 A Special Plan for Protection and Internal Reform (PEPRI) was approved in 1995. This urban programme, along with EU sponsorship, was implemented two years later, and involved two flagship projects – a large underground car park and Palma’s Law Courts. The idea was that these projects would attract tourists, investors and businesses to the area and transform the neighbourhood. Many residents were either evicted or re-accommodated and their former homes demolished. Part of the redevelopment of the area included new accommodation. However, almost none of the former residents were able to return as they were unable to afford the substantially increased rents.

More recently, Palma Activa, the city council’s local development agency, has located its headquarters in the neighbourhood. This is another flagship project that aims to encourage and support new businesses in the area.

The area has a high number of properties that are either second homes or rented to tourists.