OCR A Level Geography
Topic 1.2 – Earth’s Life Support Systems
3. How much change occurs over time in the water and carbon cycles?
3a. Human factors can disturb and enhance the natural processes and stores in the water cycles.

2. Subject overview
Access to freshwater is crucial for the survival of every community in the world. Sources, usage, infrastructure and planning all need to be considered. However, for a small Mediterranean island with limited supplies of freshwater, whose economy relies on tourism, water security should be at the heart of every political, social and economic debate.

3. Key information
Water sources
Mallorca is the largest island (3,640 km2) in the Balearic Islands archipelago, located in the western Mediterranean with a population of 861,430 (2016). Mallorca has a typically Mediterranean climate with mild winters and hot dry summers. As a result, rainwater supplies are irregular and drought is an ever present threat. There are no permanent rivers or lakes due to the island’s geology and topography. The main source of freshwater is subterranean. The S’Estremera and Llubí-Muro aquifers provide 80% of freshwater. By comparison, the Gorg Blau and Cúber reservoirs provide only 2.6%. However, the availability of underground water is dependent on the amount of rainfall. During a dry year, subterranean reserves may fall by between 30% and 50%. The demand for water peaks in the summer months. However, less than 10% of rainfall occurs at this time. It is in the summer when the island’s three desalination plants are most likely to be used. These are located in Alcudia, Andratx and Palma.

Tourism
The Mediterranean climate and natural beauty make the island a very popular tourist destination. Mallorca has 10.6 million annual visitors and 48% of the island’s GDP comes from the tourist industry. However, the viability and sustainability of Mallorca as as tourist destination is ultimately dependent upon an adequate water supply both in quantity and quality. Tourists usually consume more water when they are on holiday than when they are at home. Tourist water consumption has been estimated at around 440 litres per day, more than double the average local demand. This is a result of the use of swimming pools and golf courses, and holiday resorts opting for extensively landscaped, green open spaces. To aggravate the problem yet further, peak visitor volumes and demand for water supply coincide with the season with least rain, i.e. the summer.

Agriculture
The traditional agricultural sector in Mallorca represents just 1.2% of the total GDP. However, it accounts for 41% of the total water consumption.

Flooding
The most severe flash floods (rapid flooding) in Mallorca have occurred after a hot, dry summer. Dried ground has poor absorption ability which results in increased run off. In addition, some dry river beds have been concreted over (for roads) thus decreasing absorption rates yet further. Due to the infrequency of flash floods, dry river beds can become overgrown with vegetation and rubbish often accumulates there. Clearing and maintaining these ‘rieras’ is not a priority for many Mallorcan town councils. When a flash flood occurs, runoff collects in gullies and streams. As they join to form larger volumes, a fast flowing front of water containing debris occurs. Severe flash flooding is not an annual occurrence in Mallorca which might explain the lack of awareness and subsequent complacency. Sadly, as a result, there have been tragic consequences.

Water management issues
An analysis of the history of water security in Mallorca from the 1960s to the present day reveals a largely reactive rather than proactive approach by the regional government. In addition, environmentally damaging decisions have been taken. For example, over-exploitation of aquifers has led to the salinization of the water.

Between 1995 and 1998, fresh water was shipped daily from the River Ebro in Catalonia, using large tankers. This was then pumped into the distribution network. This was abandoned because of the expense (6 million euros per year) and the opposition of the authorities in the Ebro region.

Since 1999, desalination plants have been used to provide freshwater in Mallorca. The cost of producing 1000 litres of fresh water at one of these plants is 4 euros as opposed to 50 cents for water obtained from an aquifer.

During the spring of 2000, water shortages and power cuts produced adverse publicity in German newspapers. Bild, Germany’s best-selling tabloid newspaper, led a campaign highlighting the strains on the island’s infrastructure. Water quality and supply were highlighted as key issues. The result was a reduction in the number of Germans visiting Mallorca.

In 2008 the Sa Costera pipeline was opened. It utilises a natural spring on the island’s north coast and was built at a cost of 78 million euros. In its best year, it has only pumped 50% of the amount of water originally predicted. On 11 February 2016, the Mallorcan newspaper Última Hora reported that it was currently pumping only 2% of the normal amount.

In 2013, a hydrological plan for the Balearic Islands was proposed by the regional government. It was immediately challenged by environmental groups. They argued that: it reduced the control of aquifer water extraction; it reduced anti-contamination measures; it permitted the tripling of the number of wells; it authorized new extractions in coastal areas despite widespread salinization; it breached the Water Framework Directive; and it precluded compliance with European regulations on the chemical and ecological status of surface waters and the quantitative and qualitative recovery of aquifers.

In 2015, a revised hydrological plan was approved.

In January 2016, it was revealed that Mallorca was losing, through leakages, more than 27% of the water flowing through its network of pipes. This is equivalent to the amount of water produced by the Mallorcan desalination plants every year.

In early 2016, the Majorca Daily Bulletin reported that the President of the Balearic Islands, Francina Armengol, had admitted that there could be no guarantee of water supplies for summer 2016.

In December 2017, the development of a pilot project by the Balearic Islands’ Department of Agriculture and Environment was announced. The project aims to refill aquifers using purified water from sewage treatment plants in order to counter the effects of regular droughts. Ecotax funds will be used to pay for it.

4. Fieldwork
This study is an opportunity to investigate and understand the issue of water security using the the island of Mallorca as a case study. The study includes different site visits. Each site focuses on a different aspect of water security in order to obtain an overview of the subject.

Research questions
The water requirements of the tourist and agricultural industries in a Mediterranean climate have placed the existing infrastructure under strain.  Students will be assisted in designing a study that allows data to be collected in order to investigate and answer  a research question. Possible research questions are:

Objective: to investigate the causes of a fatal flash flood; to learn about the techniques that have been used to minimise the impact of future flash floods.

Background information: Although flash flooding is a common natural hazard in Mallorca, very severe flash floods are much less common (every 60 – 70 years). On 6 September 1989, Mallorca’s east coast experienced what is considered the worst flooding since 1932. In the half century between these two events, the economy of the island had changed from being agrarian to one focused on tourism, and the potential risks and impact of flash flooding had been forgotten. Added to this, the tourist industry promoted the island as having guaranteed summer sunshine. This perhaps explains why, in the 1980s, there was such a lack of awareness and subsequent complacency about this natural hazard. In Portocolon, the decision, in 1988, to open a hotel that had been built in a dry river bed proved fatal. A flash flood inundated the hotel and three hotel employees were trapped in a basement and drowned. Since 1989, different techniques have been employed in Portocolon to minimise the impact of future flash floods.

Conflict: A known environmental hazard was ignored by a number of different stakeholder groups (a construction company, the hotel owners, the town council) with tragic and fatal consequences for another group (tourist industry employees). 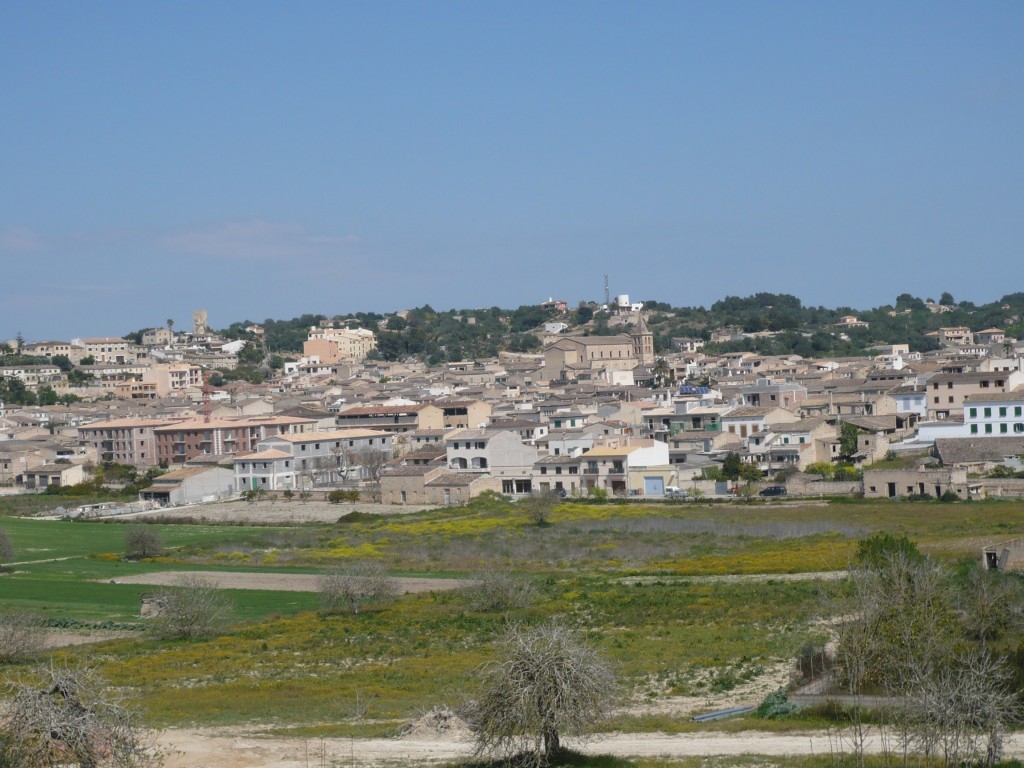 Objective: to investigate sustainable water collection schemes in a traditional Mallorcan village and the changes that have occurred over the past century.

Background information: Sant Joan is a village of 2,042 inhabitants (2016)  in the very centre of Mallorca. Traditionally, most people have been involved in the agricultural industry. However, the majority of the people now commute to work in Manacor, Palma or Inca. Although the village’s water is provided by the water board, most houses still have a traditional system of collecting rainwater from the tiled roofs. The water is channelled into an underground water tank beneath the house and this ‘cisterna’ is used like a well. Many houses also have actual wells although these are no longer used as the groundwater has been polluted by fertilizers and pesticides. Public wells, that utilise different methods for extracting water, are no longer used for the same reason. There is also a very large communal ‘cisterna’ adjacent to the village chapel. In the fields around the village, traditional Arabic irrigation systems dating from the 11th  century can be still be seen.

Conflict: The pollution of the ground water has been a source of conflict in the village.

Objective: to investigate historical and current conflicts over water rights between the different stakeholder groups in the region; to investigate the environmental damage caused to natural ecosystems as a result of these conflicts.

Methodology (primary data collection): Qualitative: interviews and observations.
Background information: The main economic activities of this area are related to the agricultural and the tourism sectors. The agricultural activity takes place in all of the municipal districts although with varying intensities (Sa Pobla is the most important). Tourism is more important in Alcudia, Muro and Santa Margalida. S’Albufera is the largest and most important wetland area in Mallorca and located near Alcudia. Human activity has halved the size of the wetlands over the past 300 years. However, in February 1988 it was declared a Natural Park thus providing some degree of environmental protection.

Conflict: The development of conflict between stakeholder groups is related to the steady tourism growth, the loss of natural ecosystems and a decrease in agricultural activity over the past decades. Stakeholder groups include: Mallorcan government agencies, town councils, the Natural Park, water supply companies, farming cooperatives and unions, NGOs, hotel owners, golf course owners, local business people and the electricity board.